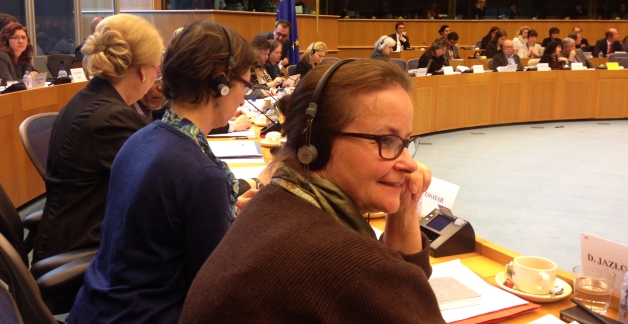 The EMPL committee has just adopted the outcome of the trilogues on the posting of workers Directive by 30 MEPs in favour and 11 against. After the striking majority voting for this text in the Council during the Coreper meeting of the 5th of March (25 MS in favour), it is a second positive signal for the future of posting of workers. The next and the last step is the plenary session in April, in Strasbourg. Two years after the publication of the EC proposal on the Enforcement Directive on posting of workers, the MEPs from the EMPL committee agreed to the text preliminarily agreed in the trilogues. The new Directive, if adopted in the plenary in Strasbourg next month, will come into force in spring 2016.

I hope that we are truly one step from adoption of the Enforcement Directive, and thus from finalizing the two year long, intensive work aimed at ensuring workers´ rights protection, and safe mobility for Europe. It is indispensable for Europe to be able to come out of the persisting crisis and to rebuild its competitiveness on international level. - said Danuta Jazłowiecka (EPP, PL) the rapporteur of the posting of workers Enforcement Directive.

Today's EMPL vote support the agreement with regards to two most controversial elements of the enforcement directive, namely the list of national control measures as well as the system of joint and several liability. In the spirit of compromise political groups agreed that Member States should have freedom in choosing control instruments to be used when inspecting foreign companies, provided that these instruments are justified and proportionate. Member States will be obliged to communicate to the European Commission control instruments they apply, but this should not be understood as an ex-ante authorization. With regards to the joint and several liability Member States are obliged to introduce a direct liability in the construction sector. At the same time they will also be able to apply alternative solutions, such as e.g. sanctions against the contactor. New provisions will not threaten systems already in place in 8 Member States.

Today's vote is a very good sign for all the stakeholders. We have managed to come up with a balanced text which on one hand will improve workers’ rights through e.g. obligatory joint and several liability system in the construction sector, where long subcontracting chains may cause problems. On the other hand, while giving Member States flexibility in choosing control instruments, we will improve legal clarity for companies through an EC monitoring and a better access to information about them. I hope, that the agreement reached today will finally stop conflicts and put an end to the negative atmosphere which emerged with regards to the posting of workers. Mobility is a very important tool in fighting the crisis and posting is one of the safest ways of working abroad - said Danuta Jazłowiecka, the EP rapporteur of the enforcement directive.

The enforcement directive contains a number of provisions that should in the future improve the functioning of the posting of workers’ process. When checking whether posting is genuine national labour inspectors will use common lists of clearly identified elements. In addition national authorities will have to take measures to exclude cases of persons falsely declared as self- employed. Agreement has been reached on improved access to information on applicable terms and conditions of employment which will have to be published on a single national website. Countries will have to indicate institutions to which workers and undertakings can address additional questions. Member States will also be obliged to put in place mechanisms enabling posted workers to lodge complaints against dishonest companies and receive from their employer e.g. outstanding net remuneration or back- payment or refund of taxes or social security contributions unduly withheld from their salaries as well as refund of excessive costs with regards to accommodation. Also administrative cooperation between Member States as well as cross-border enforcement of financial penalties and fines will be improved.

Recent discussions focused on articles 9 and 12, but the enforcement directive itself has a lot of more to offer. Personally I am very happy that Member States agreed to my idea of a single national official website containing all the necessary information on terms and conditions of employment for the posted workers. Nowadays lack of information is one of the main problems. Another important added value of this directive will be improved cross- border enforcement of financial penalties and fines. European Parliament has managed to convince Member States that fight against bogus self- employment, which is an integral part of improved implementation of the Posting of Workers Directive. I very much hope that when we come to the vote in April during the Plenary Session we will also have a big majority supporting this new directive - added Danuta Jazłowiecka.

Each year around one million workers are being posted around Europe. The three biggest sending countries are Poland, Germany and France. The main purpose of the enforcement directive is to improve implementation of the Posting of Workers Directive from 1996.

The consolidated compromise text is available in the English language version
and you can find it enclosed below.